Do you know the size of cells? It is about 10 um for mammarian cells (including human) and is about 1 um for bacteria such as E. coli. Moreover, intracelllar organelles are about 1 um, and proteins, the building blocks of the cell, is on the order of 10 nm.
By using micro-fabrication technology, it is possible to fabricate the structures and mechanical components in the size of micrometer to nanometer. The trenches and wells in such scales (often called microchannels and microchambers) enalbes the biochemical analysis and cell assays in the reduced scale. Such technologies, termed as microchips or biochips, have developed rapidly in this several decades.
The biochip technology not only enables the manipulation of cells, proteins, and reagents in the scale much smaller than that conducted on the conventional lab bench, but also provides other qualitatively distinct advantages. Cell is considered as a fundamental unit of life, and proteins are the building unit of cells. With the aid of biochip technology, it becomes possible to separate and conduct experiments for these individual units. Indivudual humans are different in many aspects, and it is widely know that the situation is the similar for the cells. For instance, properties of cancer cells continuously changes during the tumor growth process. Immune cess have huge diversity, enabling the immune repons to the variety of antigens to protect our body.
We are developing the biochips to test single cells. To do so we utilize the microchambers with the opening size slightly larger than the size of the cell to trap cells. In this tiny space, biological assays, such as the drug response tests and the gene expression analysis are conducted. We try to utilize this technology for revealing the diversity of cells.

(left) A microchamber device for the single-cell biochemical assay.
(right) Measurement of the enzyme activity from single cells. 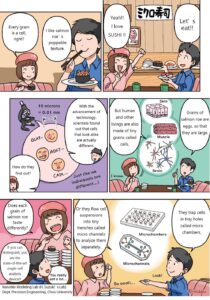 The blood and tissues of living organisms contain a variety of cells. The separation of cells according to their characteristics, properties, and functions is an important technology in cell biology research, medicine, and diagnosis. Microfluidic technology is suitable for this purpose, because it can create structures with sizes on the same order with cells.
In our laboratory, we have developed devices to conduct functional assays of individual cells by encasing them into microwells (micro-sized holes) (H. Suzuki, K. Mitsuno et al., Lab Chip, 2017). In the other line of study, we developed devices to separate blood cells of shrimp by size, and to encapsulate single cells into tiny droplets for genetic analysis (T. Murakami et al., Sens. Act. B, 2021; K. Koiwai et al., eLife, 2021).

Cells are miniature molecular machines with various functions such as biopolymer synthesis, degradation, storage, signal transduction, and motion. We are developing microdevices to evaluate the function of cells in transporting materials using microstructures. We have developed a device called a microwell array, having many holes of ~10 µm in diameter and depth. By culturing adherent cells in this device, we found a condition in which the cells adhere over the wells so that they cover the openings. Using this structure, substances released from the cells accumulate in the wells, making it possible to detect their transport functions locally and with high sensitivity. We have shown that this method can be applied to detect the function of cells to expel anticancer drugs (drug resistance) (M. Tsugane et al, Front. Bioeng. Biotech., 2015). We also developed a technique for culturing adherent cells in microgroove structures and taking high-resolution microscopic images of cell cross-sections (S. Araki, M. Nakano et al., Analyst, 2019).

The liquid flow in biochips and microfluidic devices is usually driven by external pumps. Although the chip is very small (a few centimeters square), the pump is several tens of centimeters in size, making the whole system large. Prof. Hayakawa in our department is developing a technology to control the flow in microfluidic devices using microscopic vibrations. We are collaborating with him to develop a technology to apply the vibration-induced flow for mixing liquids in microscale. We are also working with Prof. Hasegawa of the University of Tokyo to reproduce this flow by numerical simulation (K. Kaneko et al., Micromachines, 2018). This technology is now being applied for efficient collection and detection of nanoparticles present in biological samples.