Do you think it is possible to create living cells?
Mankind have made a giant progress in science and engineering, and built the highly developed civilization. Thus, will it be possible to gather all of the technologies to create the cells, a fundamental unt of life?
To jump to the conclution, it has not been possible to produce artificial cells which autonomously replicate and evolve. However, simple form of cell mimics, possessing various partical features of cells, have been realized. One of the prominent examples is the work performed by Dr. Craig Ventor, in which the whole genome of the cell is exchanged with that artificially designed on the compulter and synthesized.
We are studying liposomes (vesicles composed of lipid bilayers) as a model of cell membrane. This is one of the important components in cells, separating interior and exterior of cells. We have reported the physical phenomenon, in which liposomes spontaneously deforms into dumbell shape, mimicking cell division. The division process of eukaryote cells involves various proteins working in the concerted manner. However, our research showed that the model cell membrane can divide without such a sophisticated control mechanism. Currently we are trying to produce an artificial cell model that can replicate in concert with the presense of DNA, or that can self-assemble into organized multi-cellular structures.
Liposome is also expected to be utilized for biotechnology applications. As they can encapsulate chemical and biological molecules in its aqueous core, liposoems are used as a carrier to deliver durgs and DNAs into the human body. Moreover, if membrane proteins are incorporated, they serve as an artificial mimic for cells responding to the outside world. In the effort of studying artificial cell models, we expect new technologies for controling artificial membranes to emerge, leading to efficient and reproducible biotechnologies. However, thus far, it has been difficult to handle liposomes as an extremely “soft” material, unlike “hard” mechanical components. We closely look into the behavior of the lipid membraes to develop technologies enabling sophisticated manipulation of artificial cell membranes. 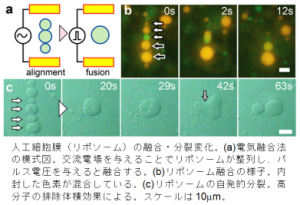 Artificial mimic of the cell division process driven by the physical effect.

Cells and organelles are bounded by membranes made of lipid bilayers. Liposomes are the mimic of cell membranes artificially created with a simple lipid composition. Liposomes are highly biocompatible capsules that can be used to encapsulate a variety of substances.
The use of liposome capsules has been widely studied in the field of drug delivery systems (DDS), where drugs are delivered to specific locations in the body. mRNA vaccines, which were rapidly approved due to the COVID pandemic, consist of mRNA encoding antigen proteins and lipids, are produced using microfluidic channels.
We are applying a similar technology to the production of larger giant liposomes. Because of their similarity in size to cells, we are using them as artificial cell models to answer the question of what preconditions give rise to the fundamental properties of cells (K. Nishimura et al., ACS Synth. Biol., 2014). In order to do so, it is necessary to develop a technique to produce liposomes with controlled size and structure. We are developing technologies to purify liposomes of uniform size using filters (Shinohara et al., Chem. Phys. Lipids, 2021) and to produce liposomes of uniform size using microfluidic channels (Ushiyama et al., submitted). We believe that these technologies will soon be widely used in biotechnology research.

Cells are highly complex bioreactors that can perform a variety of reactions simultaneously. Metabolic reactions such as the synthesis, degradation, and conversion of various biomolecules take place in well-controlled locations and timing within the cell. The lipid bilayer plays a role as a capsule. Our goal is to create an artificial reaction vessel that mimics cells. Metabolic reactions are carried out by proteins called enzymes. Therefore, if we put enzymes and molecules that serve as materials and energy together in a liposome, we can make proteins and nucleic acids inside the liposome.
A reaction vessel of the same size as a cell can be substituted by uniform water droplets in oil (water-in-oil droplets) created using microfluidic channels. This technique has been commercialized and used in many basic researches in life science and medicine. However, the outside of this reaction vessel is oil, so that it becomes a completely confined space, making the materials and nutrients difficult to be supplied. The outside of a cell is an aqueous environment, and the cell is kept alive by selectively taking in and removing various substances through the lipid membrane. Small molecules are transported by membrane proteins on the lipid membrane. Fusion and fission of the membrane are also used as means of material transport. We aim to develop biotechnologies that reproduce these characteristics of cells by using liposomes as artificial reaction vessels instead of water droplets in oil (Tsugane et al., Sci. Rep., 2018; Okano et al., ACS Synth. Biol., 2018).

Liposomes are usually spherical in shape when they are made. On the other hand, cells and organelles (mitochondria, Golgi apparatus, etc.) take on a variety of shapes. Since lipid bilayers are very soft and can bend with a radius of curvature of nanometers, they can take on a great variety of shapes.
When a high concentration of salt or sugar solution is added to the outside of liposomes, water is expelled from the inside by osmotic action (the lipid bilayer allows water molecules to pass through, albeit slowly). As a result, the membrane can change into various shapes, such as tubular or dumbbell-shaped. We have found that when we gently and slowly apply osmotic pressure to a large liposome, the tubes extend radially to become a neuron like shape (Koseki et al, Langmuir, 2020). The shape of the cell is thought to be determined to be the one that is likely to arise from a mechanics of materials perspective.
The shape of a cell is also greatly affected by the molecules contained inside it and in its environment. In living cells, the shape is regulated by the cytoskeleton and curvature-generating proteins. Even more basic molecules, such as sugars and ions, have been shown to cause curvature in membranes when their concentrations are different on both sides of the membrane. We have found that when there is a difference in the concentration of macromolecules across the membrane, i.e., a difference in the degree of molecular crowding, membrane curvature is induced, leading to membrane budding and division (Terasawa et al., PNAS, 2012; Okano et al., ACS Synth. Biol., 2018). Using this effect, we have also shown that genome-sized DNA can be encapsulated in tiny membranes (Tsugane & Suzuki, ACS Synth. Biol., 2020). We also showed that giant liposomes can efficiently encapsulate not only small molecules but also micrometer-sized particles, and their release can be electrically controlled (Katsuta et al., Langmuir, 2019).
In addition, in Topic 2 above, we mentioned that cells selectively control the entry and exit of materials through the cell membrane. Furthermore, cells also control the entry and exit of larger materials and particles by cleverly using membrane fusion and fission. We are working to develop a dynamic bioreactor that can perform membrane fusion and fission of liposomes electrically or physically, allowing materials to be transported in and out of artificial cells (Shiomi et al., PLoS ONE, 2014; Tsugane & Suzuki, Sci. Rep., 2018).

Primitive organisms are unicellular, but advanced organisms are composed of multiple cells or many cells having different roles after differentiation. As such, they acquire functions that cannot be obtained by single cells. Although researches simulating such phenomena have only just begun in the world, we would like to learn about the evolution of cells from the perspective of physics and engineering, and link this to the development of new biotechnologies.