Design strategy and production/assembly methods for artificial (industrial) products are very different from those used in creating natural objects. Human thinks about images of the final form of the product before getting into the details. However, natural objects, including inorganic/organic materials and living organisms, are formed spontaneously by the process called self-assembly. In self-assembly, there is no one who controls the assembly process with the image of the final products. In the development of animal, a fertilized embryo sequencially devides into multiple cells that further differenciate to have various structures and functins. Some ant builds anthills without blueprints; they are constructed by the result of local interaction among numerious individual ants.
In our laboratory, we aim to propose new manufacturing methodologies by learning from self-assembly and self-organization employed in nature. Will it be fun if, by simply pouring the components into a pot and shaking it, interesting structures and functional objects spontaneously emerge? We further expect that such systems may exhibit additional useful feasures, such as massively parallel manufacturing and self-healing.
What kind of principles can we learn from self-assembly in nature and living organisms? Of course we are now not be able to mimic the system as complex and sophisticated as livings possess, but perhaps we can learn from the simple subset of the molecular systems (nanoscale) and apply it for our macroscopic systems (micro to milli scales). For example, as we mentioned in the artificial membrane research, lipid molecules as individual components readily self-assemble into the closed membrane (vesicle) in the aqueous environment by the hydrophilic/hydrophobic interactions. A fragment of single-stranded DNA (ssDNA) can bind to the very specific location in the complementary ssDNA using the information engraved in the sequence of four bases (ATGC). Proteins (enzymes) use complementarity of structure and binding forces to enable highly specific interactions (i.e., they can bind and alter specific molecules). These principles tell us about the directions toward the future engineering technologies. 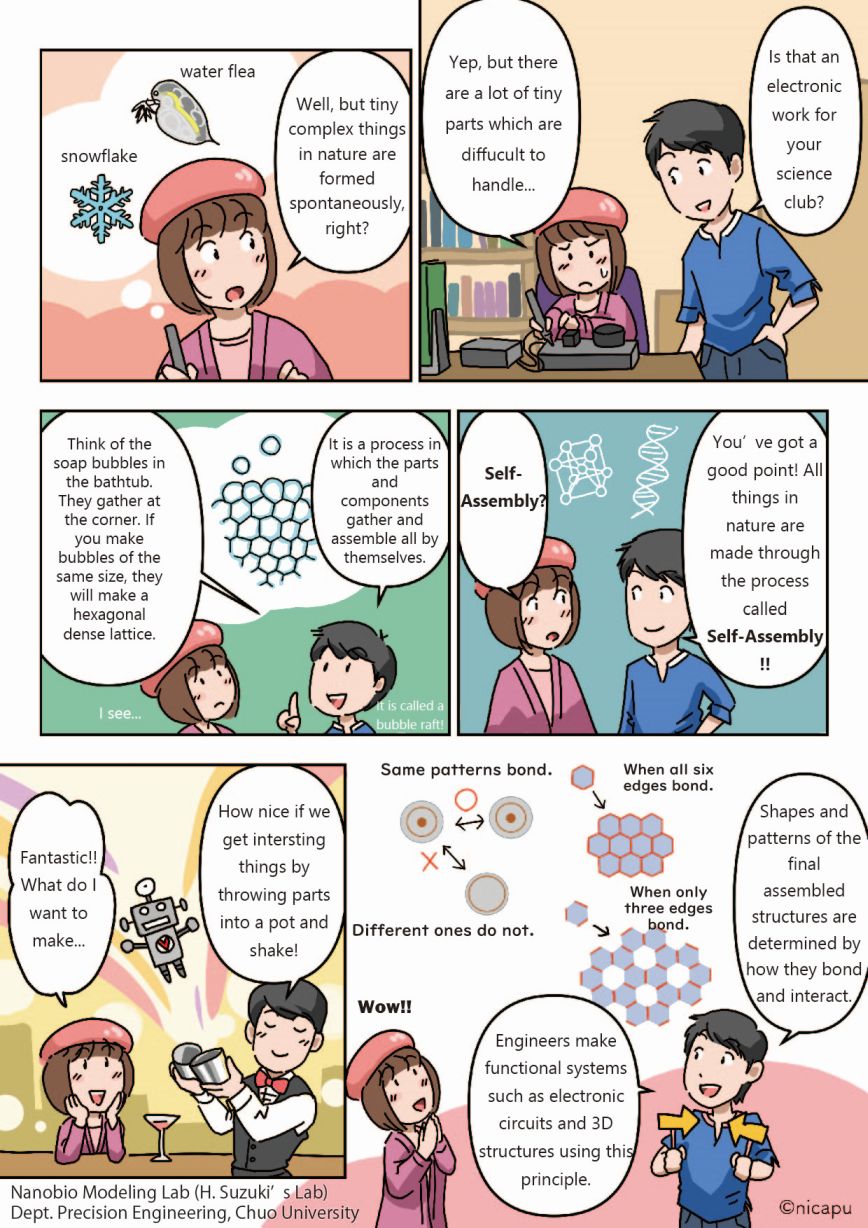 Since around 2000, many studies have been conducted in the field of MEMS (Micro-ElectroMechanical Systems) to apply the principle of self-assembly to industrial production. In the 2000s, a company called Alien technology Crop. developed a technology to mount a large number of RFID chip floating in fluid on a substrate at once. Recently, an attempt has been made to use the similar technology to mount LED elements at high density.
In these technologies, solder with a melting point of less than 50 degrees is used for mounting and electrical connection. Solder is applied to components or the substarte beforehand, and when they are stirred in or touched on the surface of hot water, the elements are placed in a fixed position on the substrate.
However, with a simple solder shape, the orientation of the elements cannot be controlled. In complex circuits, there is a need to place different types of elements in specific positions.
We are developing technologies to place multiple types of different elements in determined locations without failure by controlling the solder pattern, (Kimura et al., Sens. Act. A, 2018; Okuyama et al., Sens. Act. A, 2020), and to place elements with a fixed electrode orientation in an aligned direction.
It is important to devise a solder pattern so that the bonding area is large for correct bonding and small for incorrect bonding, so that the incorrect bonding is dislodged and the correct bonding is retained during agitation.

Topic 2: Self-assembly of micro components by the excluded volume effect

In the self-assembly of MEMS components, liquid solder and UV-curing resin are mostly used as adhesives. However, the smaller the component to be assembled, the more difficult it is to attach these adhesives properly.
In the cell, there is a phenomenon that allows molecules and nanoparticles to bond without the use of adhesives or chemical bonds. This phenomenon, called the excluded volume effect, is caused by the extremely high concentration of non-specific proteins and other molecules in the cell, which affects the arrangement of the components and causes them to bond. Using this effect, we have succeeded in bonding parts of several to tens of microns in size (Kawai et al., J. MEMS, 2019; Mori et al., Micromachines, 2019). We believe that this method can be used as a simple and reversible self-assembly technique.