We assessed the applicability of giant unilamellar vesicles (GUVs) for RNA detection using in vesicle reverse transcription polymerase chain reaction (RT-PCR). We prepared GUVs that encapsulated one-pot RT-PCR reaction mixture including template RNA, primers, and Taqman probe, using water-in-oil emulsion transfer method. After thermal cycling, we analysed the GUVs that exhibited intense fluorescence signals, which represented the cDNA amplification. The detailed analysis of flow cytometry data demonstrated that rRNA and mRNA in the total RNA can be amplified from 10–100 copies in the GUVs with 5–10 μm diameter, although the fraction of reactable GUV was approximately 60% at most. Moreover, we report that the target RNA, which was directly transferred into the GUV reactors via membrane fusion, can be amplified and detected using in vesicle RT-PCR. These results suggest that the GUVs can be used as biomimetic reactors capable of performing PCR and RT-PCR, which are important in analytical and diagnostic applications with additional functions.

RT-PCR proceeds in GUVs so that they get green!

RT-PCR reaction can be induced by the vesicle fusion. 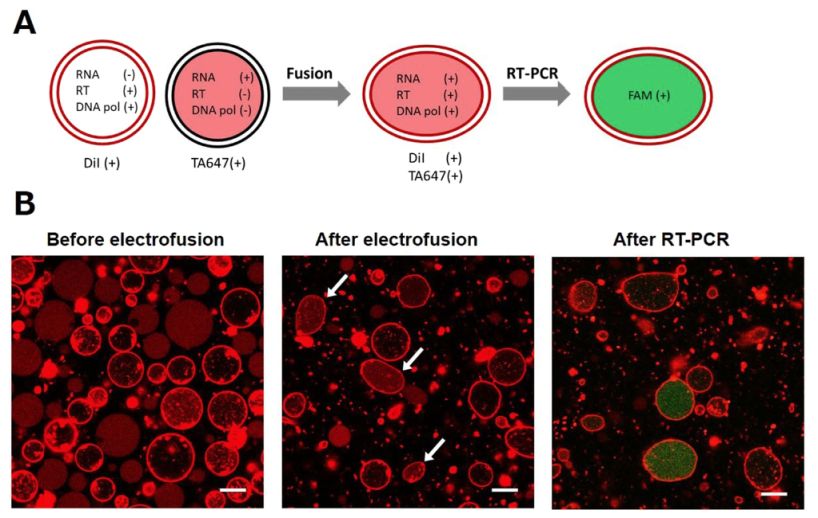