We developed a highly reproducible method for planar lipid bilayer reconstitution using a microfluidic system made of a polymethyl methacrylate (PMMA) plastic substrate. Planar lipid bilayers are formed at apertures, 100 um in diameter, by flowing lipid solution and buffer alternately into an integrated microfluidic channel. Since the amount and distribution of the lipid solution at the aperture determines the state of the lipid bilayer, controlling them precisely is crucial. We designed the geometry of the fluidic system so that a constant amount of lipid solution is distributed at the aperture. Then, the layer of lipid solution was thinned by applying an external pressure and finally became a bilayer when a pressure of 200-400 Pa was applied. The formation process can be simultaneously monitored with optical and electrical recordings. The maximum yield for bilayer formation was 90%. Using this technique, four lipid bilayers are formed simultaneously in a single chip. Finally, a channel current through gramicidin peptide ion channels was recorded to prove the compatibility of the chip with single molecule electrophysiology. 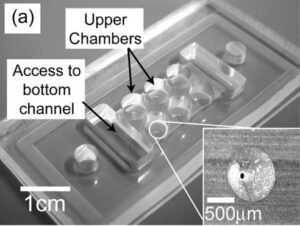 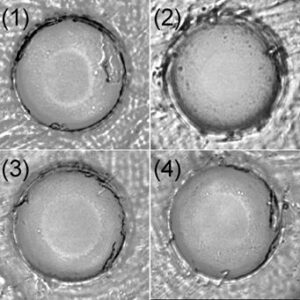