Deformation of liposomes, or lipid vesicles, has been investigated extensively in terms of the thermodynamic equilibrium of the bending energy of the lipid bilayer membrane. However, the range of such deformation in previous literature has been limited within the moderate surface-to-volume ratio of the vesicles, in which axisymmetric shapes are dominant. Here, we show that neuron-like morphology, in which many lipid tubes extend radially from the mother vesicle, becomes dominant upon the slow osmotic shrinkage of giant unilamellar vesicles (GUVs) initially larger than several tens of micrometers. We show that, in the time-lapse confocal imaging, the emergence of lipid tubes is initiated from the instability that appeared along the annular rim of the flat stomatocyte shape. Since these deformation dynamics into the neuron-like morphology resemble that of the milk-crown formation in liquid splashing, we discuss that the Rayleigh–Plateau capillary instability drives this transformation into a nonaxisymmetric shape. 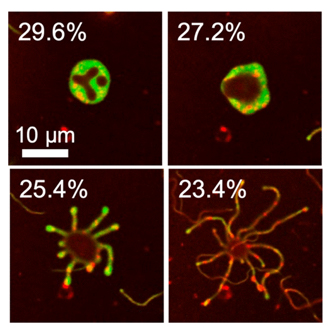