This is the work I have mostly done in Dr. Chih-Ming Ho’s lab at UCLA. It is also my PhD work.

An efficient magnetic force driven mixer with simple configuration is designed, fabricated, and tested. It is designed to facilitate the mixing of magnetic beads and biomolecules in a microchannel, where mixing is unavoidably inefficient due to its low Reynolds number. With appropriate temporal variations of the force field, chaotic mixing is achieved, hence the mixing becomes effective. The mixing device consists of embedded microconductors as a magnetic field source and a microchannel that guides the streams of working fluid. It is demonstrated that a pair of integrated micro conductors provides a local magnetic field strong enough to attract nearby magnetic beads. Mixing of magnetic beads is accomplished by applying a time-dependent control signal to a row of conductors. Two-dimensional numerical simulation has been performed to design the configuration of the channel and
electrodes, which creates chaotic motion of beads. It is found that a simple two-dimensional serpentine channel geometry with the transverse electrodes is able to create the stretching and folding of material lines, which is a manifestation of chaos. The mixing pattern predicted by the simulation has been confirmed by both flow visualization and PTV (Particle Tracking Velocimetry) in
the chaotic mixer fabricated, which should greatly increase the attachment of beads onto the target biomolecules. The optimum frequency of applied control signal is searched by evaluating the
Lyapunov exponent in both numerical and experimental particle tracking. 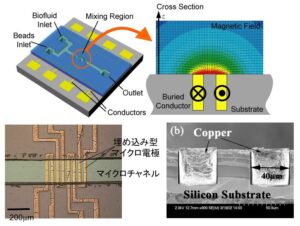